Artistic rendering of how superconducting circuits that mimic synapses (connections between neurons in the brain) might be used to create artificial optoelectronic neurons of the future. Credit: J. Chiles and J. Shainline/NIST Scientists have long looked to the brain as an inspiration for designing computing systems. Some researchers have recently […]

Scientists have long looked to the brain as an inspiration for designing computing systems. Some researchers have recently gone even further by making computer hardware with a brainlike structure. These “neuromorphic chips” have already shown great promise, but they have used conventional digital electronics, limiting their complexity and speed. As the chips become larger and more complex, the signals between their individual components become backed up like cars on a gridlocked highway and reduce computation to a crawl.

Now, a team at the National Institute of Standards and Technology (NIST) has demonstrated a solution to these communication challenges that may someday allow artificial neural systems to operate 100,000 times faster than the human brain.

The human brain is a network of about 86 billion cells called neurons, each of which can have thousands of connections (known as synapses) with its neighbors. The neurons communicate with each other using short electrical pulses called spikes to create rich, time-varying activity patterns that form the basis of cognition. In neuromorphic chips, electronic components act as artificial neurons, routing spiking signals through a brainlike network.

Doing away with conventional electronic communication infrastructure, researchers have designed networks with tiny light sources at each neuron that broadcast optical signals to thousands of connections. This scheme can be especially energy-efficient if superconducting devices are used to detect single particles of light known as photons — the smallest possible optical signal that could be used to represent a spike.

This behavior is similar to that of biological synapses. The stored current serves as a form of short-term memory, as it provides a record of how many times the neuron produced a spike in the near past. The duration of this memory is set by the time it takes for the electric current to decay in the superconducting loops, which the NIST team demonstrated can vary from hundreds of nanoseconds to milliseconds, and likely beyond. This means the hardware could be matched to problems occurring at many different time scales — from high-speed industrial control systems to more leisurely conversations with humans. The ability to set different weights by changing the bias to the Josephson junctions permits a longer-term memory that can be used to make the networks programmable so that the same network could solve many different problems.

“We could use what we’ve demonstrated here to solve computational problems, but the scale would be limited,” NIST project leader Jeff Shainline said. “Our next goal is to combine this advance in superconducting electronics with semiconductor light sources. That will allow us to achieve communication between many more elements and solve large, consequential problems.”

The team has already demonstrated light sources that could be used in a full system, but further work is required to integrate all the components on a single chip. The synapses themselves could be improved by using detector materials that operate at higher temperatures than the present system, and the team is also exploring techniques to implement synaptic weighting in larger-scale neuromorphic chips.

The work was funded in part by the Defense Advanced Research Projects Agency.

Tue Oct 11 , 2022
Monday, Oct 10, 2022 • Herb Booth : Contact The University of Texas at Arlington’s Department of Computer Science and Engineering (CSE) is partnering with State Farm Insurance to train students on what might await them in the business world. From left, Wendy Mazza, Jennifer Cowley and Peter […] 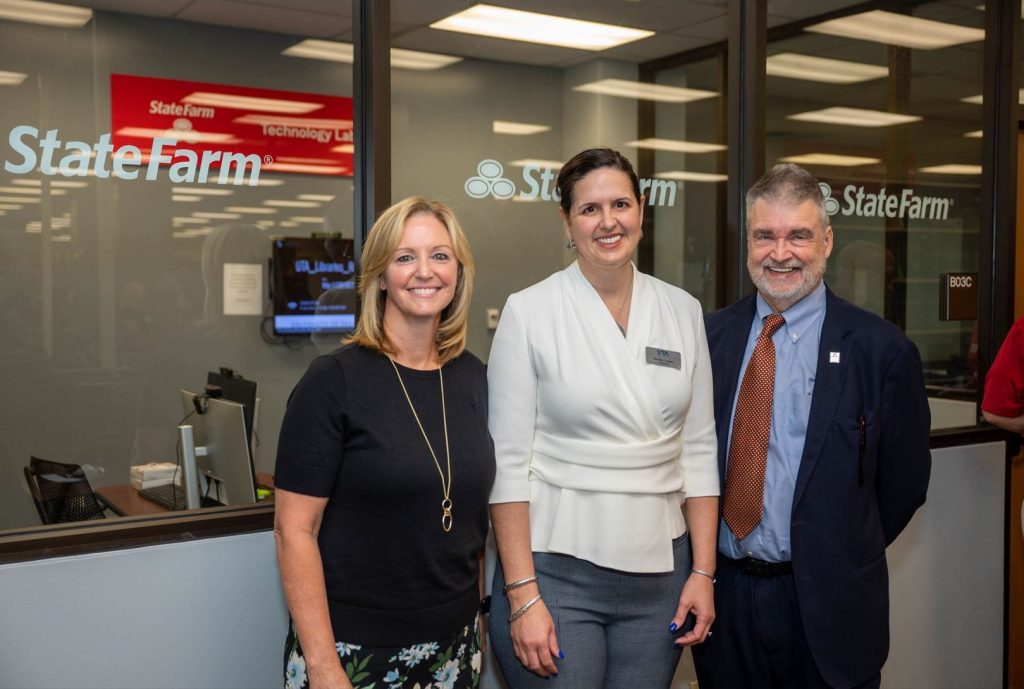