As a teenager, Philippe Laffont dreamt of working for Apple but, after graduating from the Massachusetts Institute of Technology, he was turned down five times by the company in which he would later become a prominent investor. “I’m a repressed mediocre computer scientist,” the now 55-year old hedge fund manager […]

As a teenager, Philippe Laffont dreamt of working for Apple but, after graduating from the Massachusetts Institute of Technology, he was turned down five times by the company in which he would later become a prominent investor.

“I’m a repressed mediocre computer scientist,” the now 55-year old hedge fund manager said in a wide-ranging interview with the Financial Times from his New York headquarters overlooking Central Park. The offices are adorned with various Apple products dating back to 1976 and other once pioneering but now obsolete gadgets.

Laffont, a soft-spoken and publicity-shy Frenchman, has built one of the world’s best-known technology-focused hedge funds, and has a growing business investing in private companies. As of May filings, Laffont’s Coatue Management has grown to over $70bn in assets since it launched with $50mn in December 1999. Its flagship hedge fund has gained an average of 11 per cent a year since then, compared to 6 per cent for the Nasdaq Composite.

But growth investors like Laffont, who seek to identify the handful of companies that can make exponential gains by shaping the future, are facing a reckoning. An era of cheap money has come to an end and they are adapting to a regime change of rising interest rates and high inflation.

The technology-heavy Nasdaq Composite Index is down 30 per cent this year. Hedge fund darlings like Tesla and Meta, both of which sat in Coatue’s top-10 holdings as of mid-year, have more than halved in value. And many of Coatue’s private investments have not yet been repriced to reflect the substantial declines in public markets.

Laffont has lived through a tech boom and bust before. After a brief stint at McKinsey in Madrid, he cut his teeth as a telecommunications research analyst in the late 1990s at renowned investor Julian Robertson’s Tiger Management in New York, before striking out on his own in the twilight of the dotcom boom.

After two months, Coatue was up double-digits. “Wow, this is going to be easy,” Laffont thought, before the Nasdaq index slumped four-fifths from peak to trough between March 2000 and October 2002.

Laffont survived with his reputation and business intact. But the experience left a lasting impression.

“The first three years when you run money on your own, it’s like a tattoo, you can’t get rid of it,” he said. “It always made me remember that trees don’t grow to the sky.”

He wakes at 3am each night and checks the Bloomberg terminal before going back to sleep; in the back of his mind he says he’s always thinking about “what could go wrong”.

In 2020, the unexpected happened. The coronavirus pandemic swept across the world forcing governments to impose lockdown measures.

Laffont said he underestimated how quickly life would go back to normal and the fund missed out on the huge stock market rebound of 2021.

“We didn’t think that when the world would reopen that it would obviously not change, but it basically reverted almost to where it was before and that for me was a lesson”

“I had that vivid recollection” of similar big market swings in 2000 before the tech crash, recalled Laffont. “And I just had this ‘oh my God, this is happening again’.”

Following the market sell-off earlier this year, Laffont liquidated positions in Coatue’s hedge fund because he was nervous about the macroeconomic environment. Roughly 70-80 per cent of the hedge fund’s assets are still sitting in cash, Laffont told the Robin Hood Investors Conference last month, as he anticipates a further fall in stocks.

“I feel like not digging yourself in a big hole is really important in money management,” he said.

“Philippe has a great perception for the macro,” said Dixon Boardman, founder of investor Optima, which has been a client of Coatue since launch.

While Laffont has fared better than his peers in the technology sector — his fellow ‘Tiger cub’ Chase Coleman’s hedge fund has lost more than half its value so far this year — Coatue is still nursing losses. Its main hedge fund is down 17 per cent and its long-only fund is down 28 per cent up to November 15, according to an investor. Its private markets business, which is led by Laffont’s younger brother Thomas and accounts for two-thirds of the firm’s assets, has not yet been tested through a downturn.

Now Laffont believes that the end of cheap money has thrown up a new opportunity: providing funding to cash-strapped businesses.

Coatue is raising $2bn for a structured equity fund, the Tactical Solutions fund, which can lend money to private companies rather than raising money through the traditional means of equity financing. This allows them to avoid raising cash at a cut-price valuation through a so-called “down round”, and keep investing in their businesses and going on the offence.

“For a private company to suddenly mark things down by 75 or 80 per cent or 60 per cent, it’s a huge risk that I wouldn’t recommend the companies to necessarily do, and not necessarily do it immediately,” said Laffont.

Structured equity has debt and equity characteristics, and generally includes convertible debt, senior equity or debt plus warrants. It typically offers a higher yield and gives the lender preferred status in the pecking order of shareholders.

Providing this kind of funding “puts us at the centre of the conversation” whenever a tech company “is looking to do something,” he added.

Peter Singlehurst, head of private companies at £228bn growth investor Baillie Gifford, told an FT event last week that his firm is steering its portfolio companies away from structured funding rounds because they create a “misalignment of incentives”.

New investors are coming in with “drastically different” terms from existing ones, he said: “How that all unravels when companies come to the public markets [or] if those companies do eventually need to do a down round . . . is not well understood.”

Laffont believes that the moment of reckoning in private markets will come “at some point in the first half of next year” when companies run out of cash. There’ll be a shakeout of the market as they weigh up equity down rounds, other financing options, sales or mergers. There will be some companies that won’t make it to the other end and that process is healthy,” he said.

Historically part of Coatue’s success has come from investing in China. It was an early backer of TikTok owner ByteDance, food delivery app Meituan and Tencent. Now some once bullish foreign investors, including Baillie Gifford, are cutting exposure to China amid a challenging regulatory environment.

At the Robin Hood conference, Laffont said there were some “green shoots” of opportunity in China. He is watching the geopolitical situation closely and has not meaningfully reduced his exposure there.

Coatue believes that the best defence against a tough macro environment is to identify the tectonic shifts that come each decade. “You don’t need a thousand big ideas to do well in our business, you just need the one or two key ideas that then all the dominoes start falling from,” said Laffont. In 2007 Apple opened investors to the world of mobile internet, while the launch of Amazon Web Services in 2006 heralded the rise of cloud computing.

Laffont thinks that it’s a fool’s errand to try to call the bottom of equity markets, but is starting to turn less bearish. Back in May he felt that “the glass is half empty”; now the focus is on trying to build a portfolio for the next decade “that can do well irrelevant of these headwinds” — the war in Ukraine, geopolitical tensions between the US and China, deglobalisation and supply chain sovereignty, and a prolonged period of high interest rates.

“There’s plenty of great ideas but the winners in the next 10 years are not going to be the FAANG stocks,” he added, referring to Facebook, Amazon, Apple, Netflix and Google.

Three of Coatue’s top themes for the next decade are electric vehicles, artificial intelligence and climate technology. The firm envisions a world where electric vehicles are powered by solar panels, AI enables hyper-individualised content, and homes become individual power plants sending electricity back to the grid. Coatue has built a large position in US chipmaker Nvidia — whose shares are down over 45 per cent this year — because demand for semiconductors lies at the intersection of all of these technological innovations.

Right now Laffont’s hedge fund is sitting on more cash than at any moment since Coatue has been in business. Once again its founder’s inherent caution is jostling with his belief in technological innovation.

“I am anxious to deploy capital and at the right price we’re going to do it,” Laffont said on the investor call last month. “But there’s still value in being patient and responsible and the downside could be significant . . .The better we manage risk on the downside, the more aggressive we can be on the recovery.”

Fighting for Intelligent Solutions that Save Lives | 2022 | What Would You Fight For?

Tue Nov 22 , 2022
Home › 2022 › Fighting for Intelligent Solutions that Save Lives Intelligent drones work alongside emergency responders to quickly locate and rescue drowning victims The 1,600 miles of shoreline around Lake Michigan are idyllic. Dotted with beach towns, sandy dunes and resorts, the region is a popular vacation destination. But […] 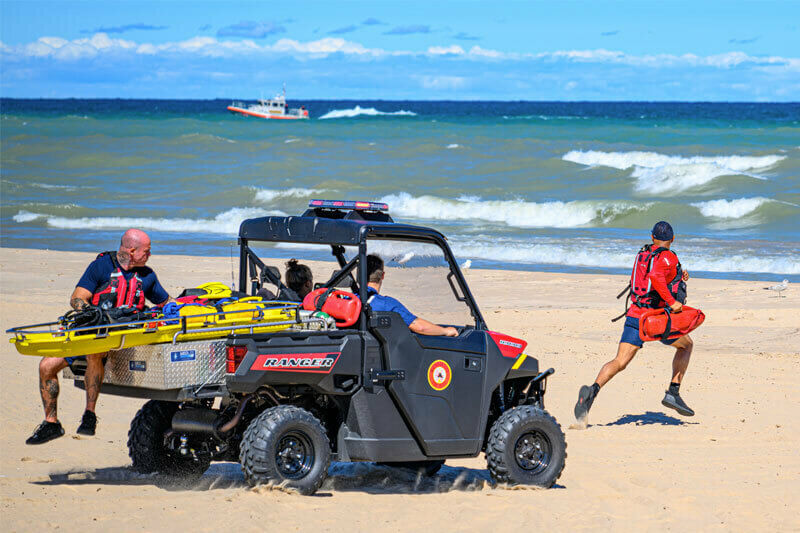